Reference on the research, scientific and organisational activities of PETROV Stanislav V. 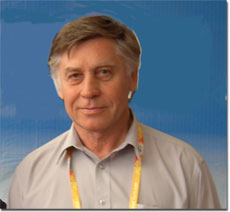 Main fields of research: Theory of processes in plasma and their applications for spraying, materials processing and plasma chemistry. New engineering, high technologies and plasma equipment.
The research activities of S.V. Petrov in a period 1990 – 2005 dedicated to  plasma technology and equipment of high-power spraying in a supersonic plasma flow of combustion products, plasma surface hardening of heavily loaded machine parts have received wide recognition both in Ukraine and abroad. Aluminoceramic plasma spray coatings have found application in Russia for corrosion protection of pipes. Certificates granted by the government – "Standard instruction for protection of heating systems from external corrosion" RD 34.20.518-95, valid since 01.01.1996. TU 1394-002-18550818-99 and technological regulations for the process of plasma deposition of aluminoceramic coatings on pipes and connecting pieces with a diameter of 57-820 mm. One very successful application of  plasma processes is treatment of railroad equipment in the Ukraine. Available are plasma surface hardening technologies and equipment developed for increasing the contact-fatigue strength of metal and, as a result, increasing the service life of wheelsets. The tests showed that in all the cases the intensity of wear of the wheelset ridges after plasma hardening was much lower (2,5-3 times) than that of the ridges after standard hardening. The technology for plasma hardening of surfaces of the wheelset ridges is applied commercially using the special plasma equipment and the relevant automatic production line.
The research activities of S.V. Petrov in a period 2006 – 2013 dedicated to  plasma-chemical technology (during development): 1. Procedure and Equipment for Organic Waste Steam Plasma Processing. The work is aimed at the development of a new environmentally appropriated process of waste (including those hazardous and detrimental) conversion into a liquid product – the high-quality combustible synthesis gas, and specifically at the increase of the process energy efficiency with minimum emission of harmful substances. 2. Process and Equipment for Plasma-Chemical Production of Silicon for Photovoltaic Power Generation. The purpose of the entire project is to build plasma units designed for a range of powers and productivities. 3. Plasma Treatment of Radioactive Water. The project proposed is intended for commercial application of a system for treatment of water contaminated with radioactive nuclides. This system is based on the use of the dissipated plasma arc discharge in a flowing gas-saturated water environment.
Publications: 2 monograph, 200 publications in referred journals and collections, 45 communications to scientific conferences and 32 patents.